The CSIR-Soil Research Institute (CSIR – SRI), – Kumasi in collaboration with York Potash Limited, a subsidiary of the Anglo-American Group, is embarking on research trials for the new Polyhalite (Poly – 4) Crop Specific Fertilizer Blends in the Bono East, Ashanti, and the Eastern Regions of Ghana. The trials are run under different implementation protocols at Mabang and New Edubiase in the Ashanti Region for Cocoa, Maize at Mfantekrom, near Techiman in Bono East Region and Oil Palm at Begoro and Kusi in the Eastern Regions of Ghana. This trial aims to compare locally available NPK to Poly-4 crop-specific fertilizer blends produced by York Potash Limited.

Ghana is the second-largest producer of cocoa in the world, with the cocoa sector providing livelihoods for over 800,000 farming households. However, cocoa yields per hectare in Ghana are meagre due to declining soil fertility, coupled with poor agronomic practices used by farmers.
The average cocoa yield is barely 400 kg ha-1 in Ghana, whereas yields are about 800 kg ha-1 in Côte d’Ivoire, 1000 kgha-1 in Indonesia and 1800 kg ha-1 in Malaysia.

Developing and implementing management practices that maximize and sustain cocoa yields is a core challenge for the cocoa value chain. Even though worldwide demand for cocoa is increasing, cocoa-producing regions suffer from declining yields because of declining soil fertility, climate change, and disease, significantly threatening cocoa supply chains. Cocoa soils may thus require a systematic application of fertilizers to improve cocoa yields. Poly-4 is used in NPK blend substitution and new crop-specific blends development to increase crop yield and contribute to the Ghana cocoa sustainability plan by promoting sustainable intensification instead of land extensification.

BACKGROUND – MAIZE
Maize is an important staple in Ghana which is cultivated and consumed across all ecological zones in the country. Production is predominantly smallholder based under rain-fed conditions.
According to the Ministry of Food and Agriculture, the average yield per hectare in most production areas currently stands at 2t/ha, a significantly lower output compared to an estimated national achievable yield average of 5.5t/ha. York Potash Limited seeks to bridge the gap in fertilizer accessibility to farmers, boost soil nutrient availability and boost local crop production including local maize.

A second trial site for maize is expected to be set up at Manga in the Upper East Region, so the trials are representative of the different agro-ecological zones of Ghana.
BACKGROUND – OIL PALM
Oil palm is the second most important tree crop in the Ghanaian economy after cocoa. It is therefore one of the leading cash crops in the rural economy in the forest belt of Ghana. Oil palm, an essential oilseed, produces many products both for domestic consumption and as inputs for the industrial sector. Our sister institute, the CSIR-Oil Palm Research Institute is leading the Poly-4 research trials on Oil Palm

WORKING VISIT
A team from the CSIR-SRI as well as York Potash limited, embarked on a two-day working visit of these trial sites on Tuesday and Wednesday, June 28 and 29 respectively. Dr Amadou Kamagate, the Regional Agronomist and focal person for York Potash, West and North Africa, said Poly-4 which is derived from a naturally occurring mineral polyhalite is a low-chloride fertilizer suitable for organic farming, and contains the appropriate combinations of essential macro and micro nutrients that specific crops need.
Poly-4 is an efficient and effective fertilizer that allows farmers to maximize their crop yield, increase quality and improve soil structure with one simple product,” he added. Dr Amadou was much contented after visiting the cocoa, Maize and Oil Palm trial sites in Ghana. 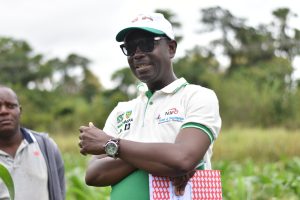 Dr Edward Yeboah, acting director of the CSIR-SRI, who led the monitoring team, commended Scientists involved in the trials for their dedication towards implementation of the project, saying; these crops have been chosen for their socioeconomic importance in the Ghanaian Agricultural Space and that he was happy with progress of work on the various sites so far and entreated all stakeholders to work hard for the continuous success of the project.