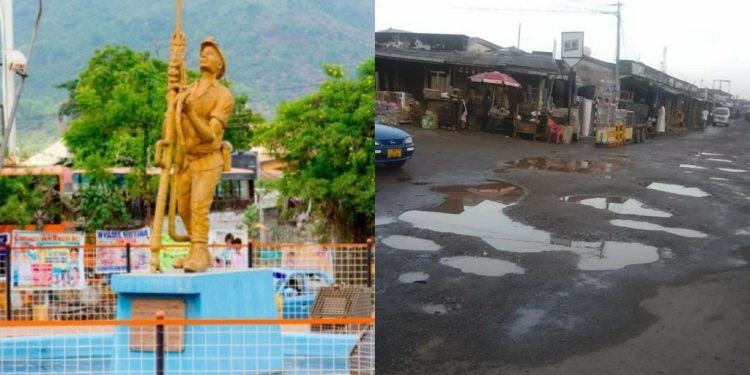 Today is World Environment Day and as an environmentalist, I would like to do a series on mining sector sustainability using Ghana as a case study. In this episode, I will argue out my points to answer two questions:

In my course, “Course 17007 Mining, and Water Resources/Environmental Protection in Africa”, at the Ruhr-Universität Bochum in Germany, I discussed and brainstormed with my students in two summer semesters why mineral-resourced-rich countries have failed to achieve sustainability! In this episode, I discuss with your audience, sustainability in the mining sector and we will implore examples from Ghana to answer the question if we are achieving or can ever achieve sustainability in the sector. I also gave the two pictures below as case studies in the assignment to my students. I do highly discourage, chew and pour in my engagements with students, and I always encourage brainstorming on a subject matter in my class. The assignment read: Study these two plates in the file below about a situation in a dominant mining community in Africa.

Applying the concept of sustainability (use the materials in the links below to help):

We will later answer these questions, but let us first analyze the first two questions: why mineral-resourced nations are poor; and why gold mining had not been able to transform Ghanaian local economies and host mining communities?

The first reason is the resource curse. Several scholarly works have linked mineral mining and extractive industries to the proliferation of poverty and underdevelopment. For example, Ross (2001; 2003) observes that ‘‘oil and mineral dependence are strongly associated with unusually adverse conditions for the poor’’, and that ‘‘higher levels of mineral dependence [are] strongly correlated with higher poverty rates.’’ Another study by Gamu et al. (2015) did empirical analyses of fifty cases and found that large-scale extractive mining industries rather exacerbate poverty in mining communities. Interestingly, same my study found that small-scale mines are linked to poverty reduction. Harvard scholars Sachs and Warmer 1995 studied ninety-seven developing countries in the period 1970 – 1989 and observed that resource-poor economies outperformed resource-rich economies in terms of economic growth. Extractive industries like that of bigger mining companies exacerbate the resource curse. The resource curse (“paradox of plenty”) refers to the paradox that countries with an abundance of natural resources (E.g., fossil fuels, oil, minerals such as gold, bauxite, diamond, etc.), tend to have less economic growth, less democracy, and worse development outcomes than countries with fewer natural resources.

In Ghana, the evidence of a resource curse is most seen in the gold mining regions and communities, where mining activities had deepening poverty, environmental degradation, and social impacts. In Nigeria, Angola, the Democratic Republic of Congo, and Sierra Leone, the resource curse resulted in armed conflicts and civil wars. This curse is also more evident in countries with a centralized government, less devolution, and less decentralization. Here, power is highly concentrated in the capital cities. Less concentration and attention are paid to the local communities. Many businesses and their registration are highly carried out in the capital cities. This system is a top-down approach that creates unnecessary frustrations, many bureaucracies and cumbersomeness in getting businesses registered and making decisions at the local level. Ghana’s decentralization is thus described by some experts as centralized decentralization. Others argue that our so-called decentralization is rather a deconcentrating.

Distribution of the gold mining revenues: The curse is also evident in countries and systems, where revenues generated from mining communities go to the central government and where little of the revenue goes to the communities where the mineral is mined and extracted. In Ghana, for instance, the mining companies pay 7% royalties of the total gold mining revenues to the Republic of Ghana. Here is the distribution: 80% of these goes to the central government (retained in the consolidated funds) and 20% is transferred to the mineral development fund (MDF) – this is stipulated in the MDF Act 2016. 10% of the 20% is retained by the MDF and 10% goes to the host mining communities. Out of this 10% that goes to the host mining communities, about 5% is transferred to the district assembly for the regulatory institutions such as the Mineral Commission and the Environmental Protection Agency (EPA). Eventually, only 1.8% end up with the chiefs for any development in the communities. No law stipulates how even the little 1.8% should be used for any meaningful development. Additionally, no checks and balances are put in place to ensure that these funds are put into their intended purpose. 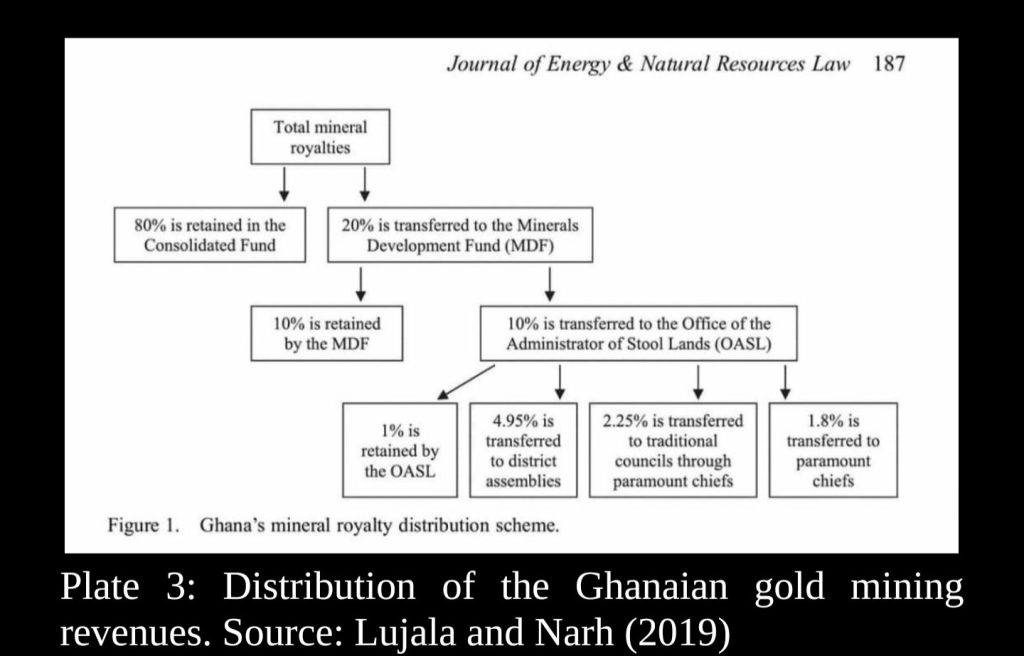 Another reason is that large-scale mining companies create “enclave economies”, where only a fraction of the total Ghanaian labour force is employed in the sector. The sector usually depends on highly technical and skilled labour, which is limited in rural communities where gold mining is done. Thus, large-scale mines exist to boost national incomes and foreign exchange earnings for the national economy, but positive economic impacts on the local communities where they operate are minimal. Several past studies had supported my argument.

This is article is a combination of three episodes in the series I did on world environment day (5/06/2022). The other analyses will be added soon.

The author, Dr. AK Mensah, holds a PhD from the Ruhr University Bochum in Germany. He is a scientist at the CSIR and the founder of the Centre for Better Society Advocacy and Research-Africa. AK is also the author of “I Speak of a Better Society”.