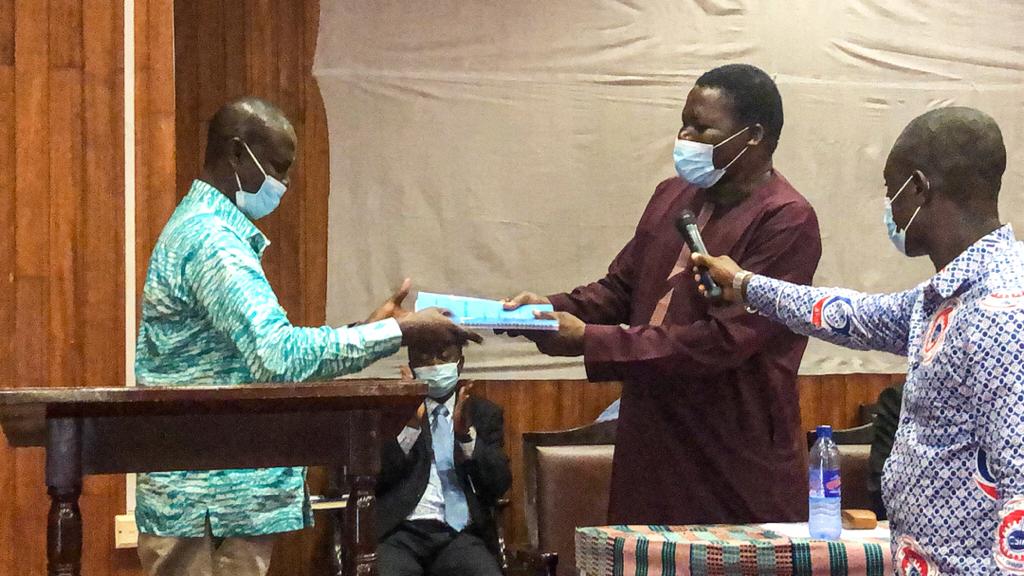 Dr. Edward Yeboah has been appointed Acting Director of CSIR – Soil Research Institute (SRI) effective from 3rd April, 2021. Until his appointment, he was the Deputy Director of the Institute. Dr. Yeboah’s appointment was announced by the Director-General of CSIR, Prof. Victor Kwame Agyeman during a ceremony held at the Institute’s conference room at Kwadaso on Thursday 1st April, 2021. This follows the retirement of the immediate past Director, Prof. Mohammed Moro Buri. 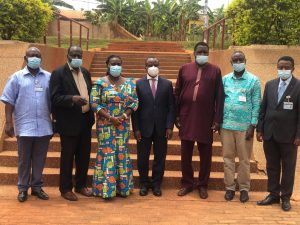 Prof. Agyeman mentioned that Dr. Yeboah would remain in an acting position until a substantive Director is appointed to steer the affairs of the Institute.

During a short handing over ceremony, Prof. Buri stated that he was very grateful for having been given the opportunity to lead the Institute. He noted that the time has come for him to leave office and therefore hands over to Dr. Edward Yeboah. Prof. Buri wished him success in his new role.

In his acceptance speech, Dr. Yeboah wished Prof. Buri well in his future endeavours. He stated that the handing over notes would be studied and the highlights of it would be presented to the Internal Management Committee (IMC). Dr. Yeboah emphasized that the new strategic plan would be fully implemented to position CSIR – SRI as a top tier institute within corporate CSIR.

Profile of the New Acting Director 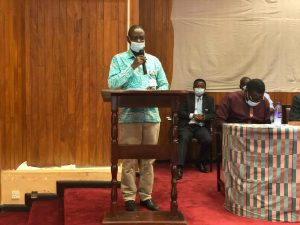 Dr. Edward Yeboah is a Principal Research Scientist of the Council for Scientific and Industrial Research – Soil Research Institute, Kumasi, Ghana. He is a Member of the International Biochar Initiative and a Steering Committee Member of African Biochar Partnership as well as a Steering Committee member of the SIANI African Biochar Expert Group. He is the President of the International Foundation for Science – Ghana Alumni (IFS – Alumni, Ghana). Dr. Yeboah is a product of the University of Ghana, Legon where he studied for his undergraduate and postgraduate degrees. He obtained his PhD in Soil Science in 2010 and his research centered on the Quality and Quantity of organic resources in sustaining crop productivity in the tropics.

Dr. Yeboah has worked at CSIR – Soil Research Institute since October 1998. In 2005, he spent six months working with Prof. Johannes Lehmann’s Lab Group in Cornell University, Ithaca, New York. In 2006, he obtained the prestigious Rothamsted Research African Fellowship to become a Visiting Scientist at Rothamsted Research, UK.  In 2010 he received the Best Researcher Award from the Council for Scientific and Industrial Research. In 2012, he obtained Commonwealth Saltire Award to study as Common Professional Fellow in Edinburgh University, UK. In 2012 he further obtained the Australian Leadership Award fellowship to study at the University of Sydney, Australia where he studied on mining West African legacy agricultural research to enhance agricultural productivity.

Dr. Yeboah is a scientist with great interest in development-oriented research projects. He has been involved in multi-disciplinary research projects on the effects of farming systems on nutrient dynamics in soils. He is involved in tropical soil biology and fertility African Network which focuses on soil organic matter in Ghana with reputations in Kenya and Zimbabwe. He participated in the European Union’s sponsored project under the sixth framework programme priority. The project explored trade-offs around farming livelihoods and the environment. It involved nine African countries and six European countries as well as two international research centres. He collaborated in the African-German partnership to enhance resource use efficiency and improve food security in urban and peri-urban agriculture in West Africa. He has a strong background in statistical analysis, computer skills and the use of other software.

Dr Yeboah’s research experience has focused on “Managing soils within the context of water, energy and food security, in order to achieve sustainable development.” He has a strong interest in unraveling the mechanisms underlying nutrient and soil organic matter dynamics in tropical agroecosystems. He works extensively with farmer groups, input suppliers, and other stakeholders in agricultural research and development to develop innovations, build capacity, and promote information exchange on soil fertility management practices for enhancing productivity of agriculture in Africa. He has successfully managed several donor funded projects, mentored scientists and is a Faculty member of the CSIR – College of Science and Technology. He currently has over 30 publications in high impact journals.