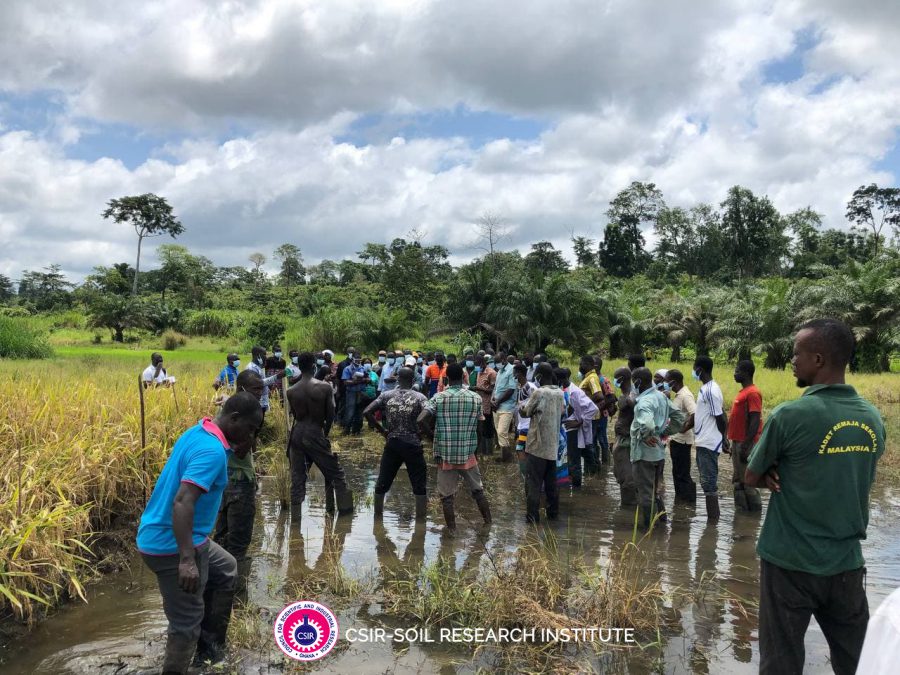 The CSIR-Soil Research Institute (CSIR-SRI) in partnership with the Research Extension Linkage Committee (RELC) of the Department of Agriculture (DoA) at the Regional, Municipal as well as District levels across the country have introduced the ‘’Sawah’’ Rice Production Technology to Famers in Ghana. This was revealed through a verification demonstration Field Day held at Anunum in the Asutifi South district of the Ahafo Region.

The verification demonstration on the technology seeks to give farmers and stakeholders a firsthand experience of the ‘‘Sawah’’ in action for enhanced adoption of good agronomic practices, that will ultimately lead to increased rice yields. It was also to highlight the existing potential that exists in Ghana to attain self-sufficiency in rice production.

The ‘’Sawah’’ is a new rice cultivation technology that focuses on the integrated management of land (i.e., ploughing, puddling and levelling), water and fertilizer for increased rice production and involves the use of farmers’ own man-made structures (i.e., bunds) to control water, conserve soil, control weeds and enhance uniform fertilizer distribution on the rice fields in order to maximize and sustain rice yields.

Speaking at the event, Mr. Ebow Cann, the District Director of Agriculture in the Asutifi South district, said; the verification demonstration is in line with the agenda of the Ministry (department) of Agriculture’s aim of increasing rice production in the country and therefore urged the farmers to put the new technology into practice to so as to achieve this objective.

Mr. Padlass P. Edeafour, Scientific secretary, speaking on behalf of the Acting Director, CSIR-SRI, noted that, Ghana spends in excess of US $400M, the equivalent of over GH¢2.4B annually on rice imports to supplement the local production. This is due to the fact that less than 40% of total rice consumption requirement is produced locally, as average grain yield stands at only 2.8 t/ha; far short of the expected potential of 6.5t/ha. The low grain yield is due to a multitude of constraints. Key amongst them include; poor land and water management,
ineffective fertilizer application regimes, post-harvest losses as well as rainfall variability due to climate change. “To increase productivity, reverse the pattern of low rice yields and subsequently the high annual rice importation, there is the need to boost rice production in Ghana by adopting the ‘‘SAWAH’’ technology, he added.

A research scientist at the institute, Dr. Ephraim Sekyi-Annan took participants through the various stages of the ‘‘Sawah’’ practices. These included the ins and outs of bund construction, ploughing, puddling and leveling. He also stressed on the importance of appropriate water and fertilizer management in the ‘‘Sawah’’ system and reiterated that the system also ensures for even fertilizer distribution on the rice fields as stated earlier. Dr. Sekyi-Annan further entreated farmers to adopt the ‘‘Sawah’’ technology so as to “to increase productivity, reverse the pattern of low rice yields and subsequently the high annual rice importation bill.

The verification demonstration field day was organized with sponsorship from the Modernizing Agriculture in Ghana (MAG) program, which is funded by the Government of Canada and has the objective of  improving food security through making the Ghanaian agricultural sector more modern, equitable and sustainable.

The exercise which was graced by traditional leaders, government representatives, farmers and the media is expected to be replicated in other parts of the Ashanti and Bono regions of the country.