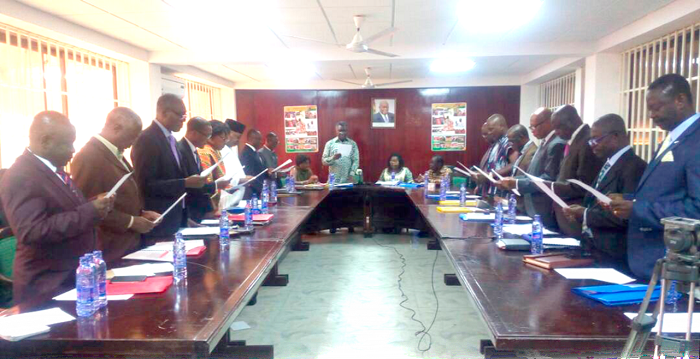 Prof. Kwabena Frimpong Boateng administering the oath of office to the Council members

The Minister of Environment, Science, Technology and Innovation (MESTI), Professor Kwabena Frimpong Boateng, has given an assurance to researchers that the proposed increment in scientific research fund from 0.25 per cent of Gross Domestic Product (GDP) to two per cent will take effect in 2018.Government has announced the increment on several national platforms since early 2017, including the 2017 State of the Nation Address.Prof. Frimpong Boateng said the one per cent increment was a short-term measure, which would further be increased to three per cent in the long term.

He indicated that the 0.25 per cent was woefully inadequate to make meaningful scientific development in the country and that had informed the increment.

Inaugurating the Governing Council for the Council for Scientific and Industrial Research (CSIR) in Accra yesterday, Prof. Frimpong Boateng said the delay in effecting the increment was to enable the government to put in place the necessary policies that would make it binding on successive governments.

He said government was committed to developing scientific research because it was a key driver of its development agenda.

“Therefore, the funds will be made available to all researchers in both the private and public sectors and research institutions without discrimination. All researchers doing something good for the nation would have access to the funds,” he said.

Prof. Frimpong Boateng said the government had identified the scientific research sector as an integral part of realising the technologically-driven Ghana beyond aid vision.

“No country ever develops without building the capacity in terms of technology to do things related to its development on its own and, therefore, government will commit enough funds to build national capacity in scientific research,” he stated.

He underscored the need for all stakeholders, particularly, the CSIR, to position itself to help run the country and its economy beyond aid.

Prof. Frimpong Boateng said as part of measures to develop the scientific research sector, the government was setting up a science innovation centre at the CSIR which would be fitted with the first ever super scientific computer in the country and would be made accessible to all universities and research institutions.

On behalf of the 21-member governing council, its chairman, Prof. Robert Kingsford-Adaboh, expressed gratitude to the President for the confidence reposed in the members and gave am assurance that the council would work hard to ensure that the CSIR lived up to its mandate to accelerate national development.

The council has representatives from MESTI, Ghana National Chamber of Commerce, Heads of Universities in Ghana, the Ghana Academy of Arts and Sciences, the Ministries of Food and Agriculture, Trade and Industry and Health, the National Development Planning Commission, the CSIR, the Ghana Institute of Engineers, the Chamber of Mines and the Association of Ghana Industries.